The Atacama Photographic Survey (APO) is a remotely controlled observory in the Atacama desert run by French amateur astronomers Thierry Demange, Richard Galli and Thomas Petit (APO-team). Its chosen location makes it ideal to observe the wonders of the Southern Sky, with stunning images having been taken of the Carina and Prawn Nebula, among many others! However, their technique of imaging have revealed a few tens of Planetary Nebulae that otherwise mimick the appearance of ordinary stars! 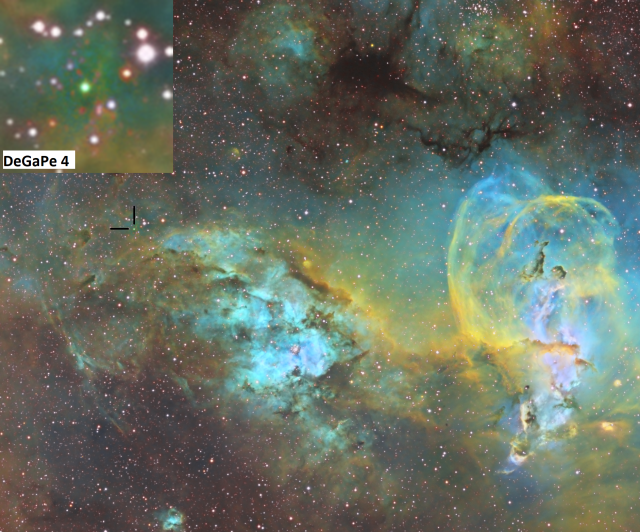 Extract of NGC 3576 taken by the APO-team using the SHO method (SII+Halpha+OIII). The image reveals one of their discoveries: DeGaPe 4, a possible “stellar” Planetary Nebula. Notice how its flashy green colour stands out in comparison to the rest of the stars in this image! (c) APO-team.

The APO-team has been imaging the Southern sky since 2014, but it wasn’t until the beginning of 2015 that they made their first (accidental!) discovery: DeGaPe 1 (see further below). As the team started imaging using the SHO technique (combining SII, Halpha and OIII exposures), they started noticing “stars” that displayed particular fluorescent colours that clearly stood out in their images. It turns out that these objects were not stars at all, but are more likely small and/or compact Planetary Nebulae! Their distinct colours in SHO images are due to their strong OIII, Halpha and SII emissions, atypical of “ordinary” stars. Below are some examples of their “stellar” PN candidate discoveries. 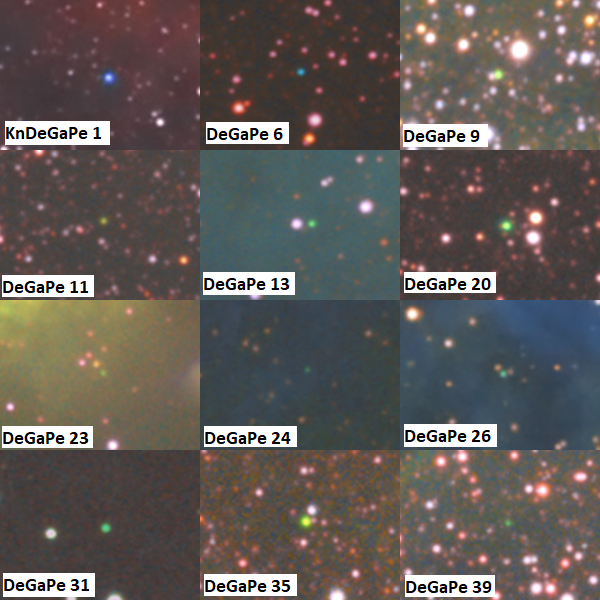 Mosaic of put together by the author of twelve stellar Planetary Nebula candidates discovered by the APO-team. Notice their unusually flashy green or blue colours in comparison to the surrounding stars. KnDeGaPe 1 was co-discovered with austrian PN hunter Matthias Kronberger. (c) APO-team.

In fact, some of their discoveires appear compact to the point that not even the high-resolution DECaLS images can display their nebulous nature! Furthermore, their Mid-IR signal doesn’t always display the “typical” colours of PNe! Hence, only SHO imagery are able to really reveal their PN-like nature. Hence, no wonder why these PN candidates were discovered only recently!

DeGaPe 43: A PN-like object in APO SHO imagery (left), but that in DECaLS (middle) appears completely stellar and that displays an WISE signal atypical of most PNe! PNe in WISE tend to peak in the W4 band (will appear red in AllWISE images due to their colou-coding). Image credit: APO-team, DECaLS and AllWISE Aladin Lite.

Unlike objects such as DeGaPe 43 (above), the rest of their finds display typical Mid-IR signals, and/or appear nebulous (at least quasi-stellar) in DECaLS. DeGaPe 6 is one such typical PN-like object!

As of February 2018, the team has discovered a total of 50 Planetary Nebula candidates, most of them being of stellar morphology, as seen above. The rest however display a very obvious nebulous nature. In fact their first discovery (DeGaPe 1) was a very faint and round PN candidate located at the edge of the Vela Supernova Remnant! Other of their nebulous finds include DeGaPe 2, DeGaPe 50 and DeGaPe Object 2 (see further below). 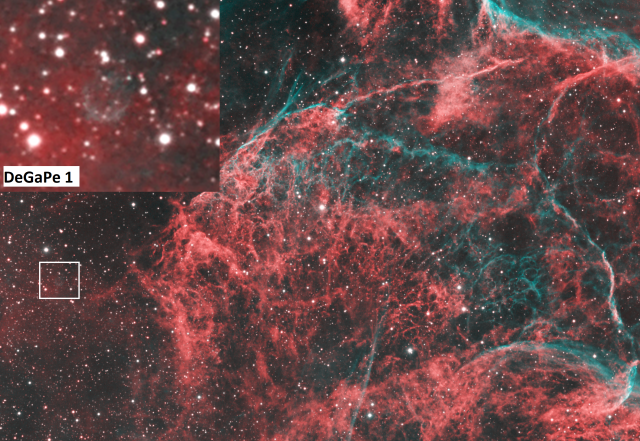 Discovery image of DeGaPe 1. The image is taken in OIII+Halpha and shows the object to have an asymetric round appearance, appearing mostly visible in the OIII filter. (c) APO-team.

One of their more interesting nebulous finds is DeGaPe Object 2. Located in Ara. It’s a possible vast (about 8′-9′) HII candidate with a rather chaotic morphology. Its appearance is similar to many Supernova Remnants (which is what it was first thought it could be!).

Zoomed view on DeGaPe Object 2, imaged by the APO-team using the SHO method. Notice its rather chaotic and aymetric nature. (c) APO-team.

More about the APO-team, their observatory and their finds can be found on their website; http://www.atacama-photographic-observatory.com/presentation.php

Their wevsite also includes the full-scale images that they take, wether it be in SHO, Halpha+OIII or LRGB!